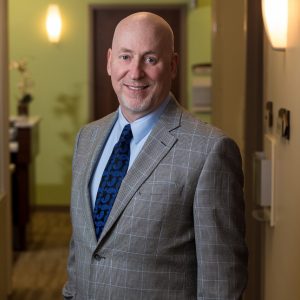 Dr. Liegner was born in New Jersey. He received his degree in physics from Duke University under an Air Force ROTC Scholarship, and then served four years of active duty in Texas as a research physicist.

He completed his medical degree at the University of Texas Health Science Center (UTHSC) in San Antonio, Texas, while also receiving a Master’s degree in biology under a separate academic program during the first two years of medical school. He interned in Internal Medicine at the University-affiliated County and Veteran’s Hospitals in San Antonio, and subsequently completed a residency in ophthalmology at UTHSC.

Dr. Liegner has performed many thousands of intraocular and corneal refractive surgery procedures, including the LASIK procedure beginning in mid-1990’s for near sightedness, far sightedness and astigmatism, providing patients with much improved vision and a new sense of freedom.  Also, he holds multiple world patents for the medication combination that represents dropless cataract surgery, savings patients time and the expense of eye drops, with lower infection rates and faster visual recovery.

Dr. Liegner is Board certified in ophthalmology, a Fellow of the American Academy of Ophthalmology (AAO), the American Society of Cataract and Refractive Surgeons (ASCRS), and the American College of Surgeons (ACS). After 26 years of service in the Air Force as a reservist, flight surgeon and physicist, Dr. Liegner held the rank of Lieutenant Colonel (now retired).  He has been a Clinical Instructor of ophthalmology residents and medical students at the several universities, and after retiring from the military, has been on staff for the Veteran’s Administration (VA) Hospital System.  Dr. Liegner has also been the Medical Director of surgery centers, of free community clinics for the poor and indigent, plus optometric offices (developing instructive COPE courses for continuing education), and is even a Fellow of the American Academy of Cosmetic Surgery (AACS) performing hundreds of facial plastic procedures annually.